So now that I’ve had a little bit of time to process what happened to us last weekend, I can write about it. Last weekend, while we were in Sacramento, my car was broken into and so much was stolen. We took my son and his best friend to their very first concert last Saturday and on Sunday while checking out of our hotel, apparently someone was watching me load my car because they waited until I loaded my last load which was all of my important items like my purse and my laptop and my iPad and my craft bag. I loaded the last of our luggage into my car, went back into our room one last time to check if I had missed anything and when I walked back out to my car, two of my windows had been busted in.

I had told my hubby to take the kids to the pool and I’d load the car. Boy, am I regretting that now…  I wasn’t quite ready yet and they were chomping at the bit to go swimming so I said I’d finish getting ready, load the car and then I’d meet them at the pool.

I don’t even care about the laptop or the iPad or my purse. Most of it is replaceable. But they took my external hard drive.  Every single video I’ve ever recorded, thousands of pictures of Jayden and his friends, holidays, birthdays, field trips, all of them are gone…  why did I have such a valuable item with me, you ask? Well because all of my card making videos are on that same hard drive. I figured I would bring my laptop and my ext. HD and maybe get a video edited early in the morning while I waited for everyone else to get up.  I usually get up around 5 a.m. so I figured I had a couple hours to get some work done.

They took so much more than that, which is amazing considering the little amount of time they had, but the external hard drive is all I really care about. I’m pretty bummed about my craft bag too since they don’t make it anymore. All of my brand new Purple Onion Designs stamps were in that bag. My day planner, the only day planner I actually liked!!  They got my brand new Faber Castell Polychromos colored pencils as well as my Prisma pencils.

Usually, I’m always in my car or at least someone is, when I have important items like that in my car, but it was the middle of the day, I was literally only gone maybe 5 minutes, never in a million years would I have ever thought this could happen.  I thought the Doubletree by Hilton was a pretty decent hotel. I guess I was wrong. I had actually backed my rig up to the door so it would be less of a haul for me since I was packing out 4 people’s luggage AND I was directly below a security camera. There were gates all around the hotel, but most of them just stayed opened so they were kind of pointless. The hotel was NOT very accommodating at all. They wouldn’t even view the security footage without a subpoena.   They wouldn’t even let the cops view the footage without a subpoena. I don’t understand that one….  We think it may have been someone that works there. Not to mention, it took them well over 20 minutes to even send someone back to where we were!!!  And the first words they uttered to me was that they are not responsible for lost or stolen items in the parking lot…  Really??!!?

Anyway, this week has been fun. I can’t even rent a car because I have no license. My license was in my purse. I don’t have any credit cards, the only card I had in my wallet was my bank card. So it’s back to writing checks for me!!  At least until my new bank card comes.  They did try using my bank card.  Twice at Target.  Once for $800 and again for $400.  I guess the jokes on them because there wasn’t $400 in that account.

All of my medications were stolen, yet my insurance won’t cover the cost to replace them, so there’s even more money we’re out. Tell me how this makes any sense….  WE get robbed, yet we’re the ones that are out $1,500 in deductible fees…  What the wha???

They got my husband’s duffle bag, they stole my son’s duffle bag, they stole my travel bag, my craft bag, my computer bag and my purse. Target bags full of newly purchased items, MY CRAFT BAG!!! I’ll say it again for additional shock value.  What the HECK are they going to do with all those brand new, never been used stamps?!!??  Talk about feeling violated!!!  I’ve mourned the loss of my stamps and videos and pictures and now I’m just angry.

I know I should jump back into cardmaking and recording more videos and get right back to it…  But I’m feeling a little deflated.

Hoping for a better weekend…. 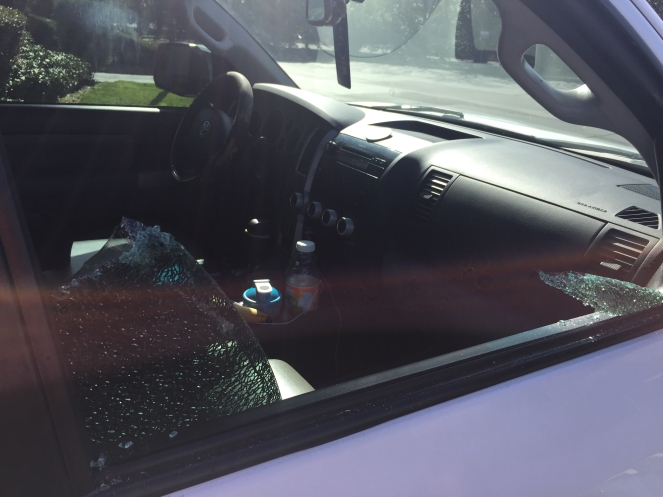 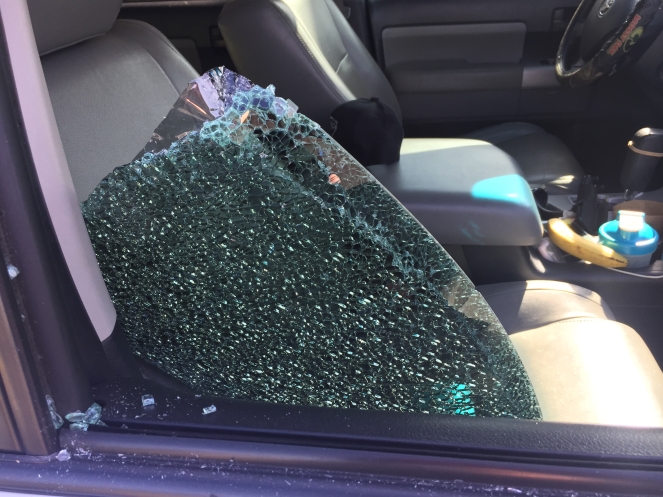 And for my final entry into the NBUS Challenge that is STILL going on over at my crafty friend, Darnell’s blog….  Click here to be taken directly to her blog.  You won’t be sorry you did.  She’s highly entertaining and extremely talented.  Actually, I’m pretty sure the few followers I have on here all already know Darnell and all about the NBUS challenge, but for those that may be viewing this that do not know, you gotta check it out.  I’m not a challenge kinda gal (although I wish I were), but this is one challenge I can never pass up.

Anyway, it might be too late.  I’m not quite sure what the cutoff time is so I’m rushing to get this last one in because I know today is the final day of week 3.  Darnell does this challenge a couple times a year though so do check it out.

The NBUS item I used is Beautiful Ride by Simon Says Stamp.  I also used Number It by Mama Elephant and either the small or large Stitched Rectangle by Lawn Fawn.  I’ve mixed the two sets together so I have no idea which set this came from.  The Happy is from Mama Elephant.  As soon as I get this card entered, I’ll start working on a process video to add to my YouTube channel.  As soon as it’s uploaded, you will be able to click here to be redirected to that video. UPDATE:  No process video coming. All videos were stolen when my external hard drive, among many other items were stolen from my vehicle last weekend..  ☹️ (see “Robbed” post next)

This card was super easy to make. I actually CASE’d Wanda Guess’ card that she made here. I had a customer pick out this particular stamp set and these colors with 75th somewhere on it to celebrate her Mom’s 75th Birthday!!  I struggled a bit with the layout, which is why I tried Wanda’s layout and between this layout and a couple others, we both agreed that this was the best out of the bunch.

I colored the images with my copic markers and then partially ink blended some distress ink on the “Happy” die. I tried my best to match my copics to the Salty Ocean distress ink that I used and I think it matches pretty well!!  So the “Happy” is done with DI and the “75” was done with copics.

I die cut the “happy” four times and then used some Elmer’s Craft Bond spray adhesive to glue them all together to get some much needed dimension.

I didn’t have any purple cardstock to match the flowers so I just made my own strip using my copics. I cut the plaid background to A2 size and then used a bit smaller than A2 size of the stitched rectangles so that I could angle the rectangle. 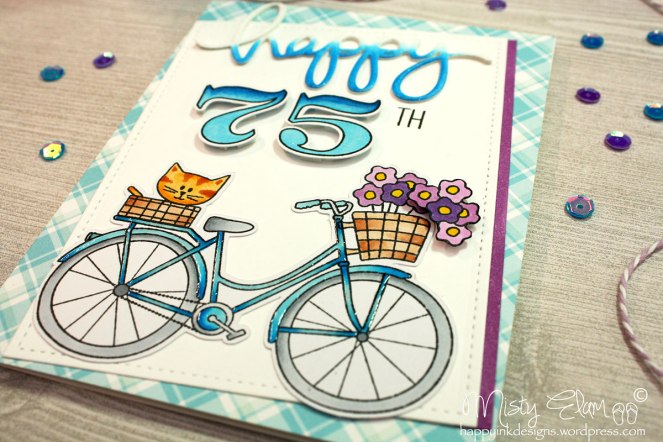 I used some Wink of Stella AND Spectrum Noir  Sparkle on the “Happy” and also on the number 75. I couldn’t decide which one to use so I just used both…  Then I put some 3D adhesive squares on the back of the number 75 and a portion of the flowers, again, taking a page out of Wanda’s layout, to make the flowers look fuller. 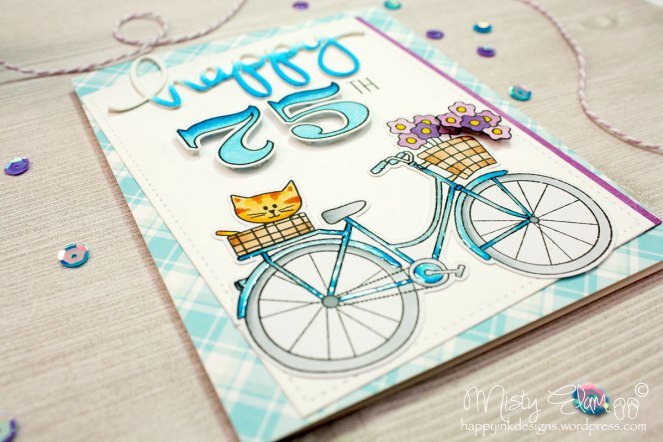 Lastly, I added some Glossy Accents to the blue bike frame since bike frames are usually shiny. And that’s it!!  Easy peasy, right?? 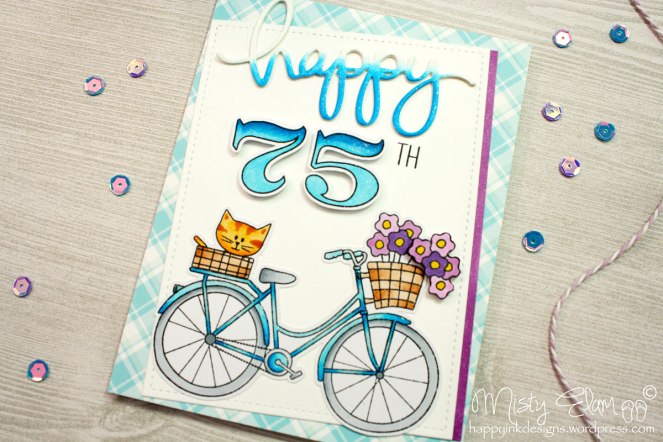 I’m so happy that this order and this challenge just so happened to be at the same time.  It couldn’t have been better timing!!

Thanks for stopping by!!

75th done using the same blues as the bike 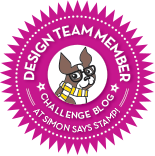 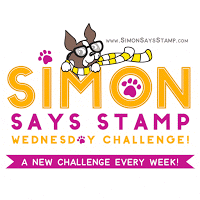 Want It For Yourself?

I was “SPOTTED” by Simon Says Stamp!!!

L.O.V.E. 3 of my babies, Trigger, Ollie and Jayden #love #mybabies #myheart #cantwaittogethome
I’d rather be crafting!! 🤓 🤪#idratherbecrafting #hospitalssuck #missingmyboys #imissmycraftroom
Missing my boys a little extra today.. 😢 Can’t wait to be home. #hospitalssuck #iwannabehomealready #homesick
Totally forgot to share this!!! Join us this week for our “Something New” challenge over at the Simon Says Stamp Wednesday Challenge blog! We’re showcasing products from @whimsystamps this week. Just by joining us you are automatically entered for a chance to win a $50 shopping spree @simonsaysstamp !! #ssswchallenge #simonsaysstamp #whimsystamps #adoptdontshop #handmadecards #handmadegreetingcards #copiccoloring #distressoxideinks #slimlinemarqueedie