Hello crafty friends!!  I hope everyone is having an awesome weekend. I just wanted to pop on here real quick and let you know that I haven’t fallen off the face of the earth, I’m still here. I’m just taking a wee little craft break. A much needed crafty break. I’ve been neglecting other areas of my life and well, it’s coming back to bite me. I’m speaking mainly of my health. I just haven’t been taking care of myself like I should be and now I’m paying the price. Nothing major, just a little infection that doesn’t seem to want to go away. My goodness abscesses are painful!! I was in bed for a week!!  A lovely side effect of having so many abdominal surgeries…

Anyway, before the pain took over, we did get to take the boys to a MLB baseball game in Oakland. A’s against Redsox. We had fun! Here are a few pix.  My whole family went (all 22 of us), but we were all spread out throughout this one section, which was kind of a bummer, but we still had fun.  The only thing that would have made this better was if we had all been able to sit together.  Next time…

We had 4th row seats!! We could see the sweat on the players brow, we were so close.

Besides my health, I really just need a break. Does that ever happen to you? Where you just need a break from doing what you love most?? When it starts to feel more like a chore than it does a hobby, that’s when I know it’s time to take a break. But before too long, I’ll be itching to make another card and before you know, I’ll be back at it.

Thank you ladies for all of your wonderful support on here and on my YouTube channel and Instagram. Your encouraging comments and making new friends and seeing your lovely creations are a huge part of why I love doing this so much.

I’ll talk to you guys soon!!

Hi guys!!  Today is a good day!!  Today is the day that Simon Says Stamp has a new release called Fluttering By.  But you’ll want to do more than just flutter by.  You’ll want to stop and shop for awhile because it’s full of lovely butterflies and great new stamp sets for the upcoming Mother’s Day.  I even saw something for those grads too!

I had sooo much fun creating these cards for this release.  And they were pretty simple to make too.  All I did was heat emboss the flowers, ink blend them in a rainbow of colors, heat emboss the word “Mom” onto some vellum, then glue them all to my pre-made background.

I LOVE anything in rainbow!!  Look at those colors!

I added a strip of silver glitter paper to the bottom of the first card because I felt like it needed a little something else.  I think it was just what it needed.  I actually thought I had ruined this first card when I was gluing it all together because I put glue on the back of the word “MOM” and when I stuck it to my background it wasn’t a flat surface so you could see everywhere that the flowers were raised through the silver embossing powder!!  Does that make sense?  Here, I’ll try and show you:

It’s REALLY hard to tell in this photo (it’s actually just a screenshot from my video), but if you look at the shadows in the letters, that’s where it looked lumpy.  Now’s a good time to mention that photographing silver embossing powder is IMPOSSIBLE!!!  My goodness, I had a hard time with that.  The silver E.P. and the acetate are two of the hardest things I’ve come across to photograph.  But I will say that the lumpiness mellowed out after letting it sit there for awhile, so you can’t even see it in my photographs.  But when making it, I thought I had ruined it.

See, it mellowed out pretty nicely.  You can still see it a bit, but it’s definitely not as bad as it first was.  But at the time, I panicked and quickly made a backup.  I mean, this was my first project for Simon Says Stamp!!  I couldn’t post less than stellar artwork!!  Heavens no!!  Boy, am I glad I panicked though because what I made next, made me “ooh” and “aaah”.

Doesn’t it look AWESOME on acetate?!?  I LOVE how this one turned out!!

But I wised up when I made this one and used scor tape on the back of the letters but only put the scor tape where the flowers met the letters.  So the “O” has no adhesive on the back.  But that’s ok because scor tape is amazing and I know it isn’t going anywhere.

If I make this one again, I’d love to have a full card front of acetate tucked behind the alcohol inked background.  So if you lifted the acetate, you would only see the flowers.  The “MOM” would still be on the acetate.  Wouldn’t that look cool?

So now that you’ve seen a little corner of this new release, head over and do some shopping at Simon Says Stamp!!  I’ve included links to the ENTIRE release below!!  Thanks so much for stopping by!!

(Affiliate links used where possible)  Scroll down for the entire release

Now check out the entire release!!

Good morning crafty friends!  I have to share this AWESOME card kit that is available at Simon Says Stamp.  I can’t believe how much is included in this set!!  That “Mom” die is one of my favorites.  As is the Mom’s Clematis stamp set.  For a complete list of all the items included, check out this post by Simon Says Stamp .  You’ll also find some gorgeous inspiration there too!

It’s only available while supplies last so if you’re interested in it, ya better head over and grab yourself one before it’s too late.  It’s valued at over $80 but you can get it for just under $50.

Simon Says Stamp shared this video so you can see everything up close.

I’ll see you guys tomorrow with my Simon Says Stamp project that’s part of the new release called Fluttering By.  If you missed my sneak peek, head to my Instagram for a little clip. 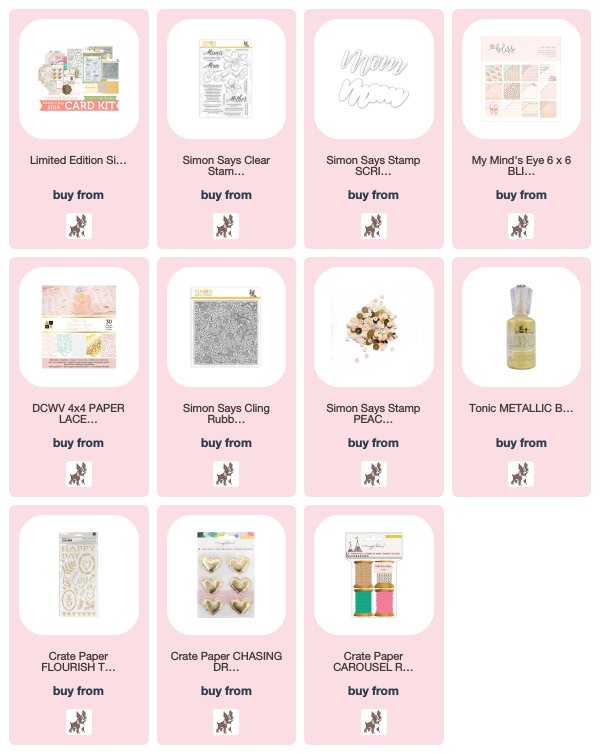 Hi guys!! I hope everyone had a great Easter. I know I sure did.  We had a great sermon at church and then an awesome turnout at my church’s Easter dinner that my Mom coordinates each year.  It’s so cool to see so many people come together to help serve our community a delicious dinner.  There’s folks from all walks of life there.  It’s basically for anyone who wants a delicious, home cooked meal.  For those that are homebound, we have people that even deliver!!  It’s a really great experience.

Anyway, on to my card.  I’m here to share a Birthday card with you for this week’s theme at Always Fun Challenges.  This was my first experiment with alcohol inks.  It was interesting, that’s for sure.  I actually ended up using a background that my kid made.  It seems like I overworked the ones that I did.  His outcome was what I was hoping to achieve.  Maybe next time…

This card was just way too easy.  All I did was cut the Big Birthday die from MFT out of my background and voila!  It doesn’t get much easier than that!!

I just love the colors of this background!!  I have another card to share with you guys on Wednesday which will be my very first project for Drive By Crafts as a design team member so stay tuned for that one.

If you’d like to join us at the Always Fun Challenges blog, click on the link in the sidebar or click here to add your entry.

Thanks so much for stopping by!!

Happy Easter everyone!!  Just wanted to share this bright number in celebration of this great day.  Rejoice!!

I hope everyone enjoys this day with friends and family and take a moment to appreciate what Easter really is.

I used mostly Simon Says Stamp products.  I will list them as soon as I can.

Thanks for stopping by!!

Want It For Yourself?

I was “SPOTTED” by Simon Says Stamp!!!

There’s still time to join us this week for the Simon Says Stamp Wednesday Challenge!! You have until Tuesday to join. Our challenge is Love Is In The Air and we’re featuring products from Clearly Besotted. It’s ok if you don’t have product from the featured company, you can still join the challenge! Please click the link in my bio for details on my card and how to enter. #ssswchallenge #simonsaysstamp #handmadecards #handmadegreetingcards #handmade #papercrafts #papercrafting #loveyoulike #watercolor #besthobbyever
I know this is late but there’s still time to join this week’s @simonsaysstamp Wednesday Challenge!!! Our challenge is Fabulous Florals and we’re showcasing products from the fabulous Waffle Flower. Click the link in my bio for details on my card. #ssswchallenge #handmade #handmadecards #florals #cardmaking #cardmaker
Happy Holidays!!! These were taken before I was put on bed rest. I’m glad I at least got a couple holiday pix. ♥️
Happy Wednesday everyone!! It’s time for a new challenge to start @simonsaysstamp Wednesday challenge blog. This week our challenge is “Not a Card” and we’re featuring Memory Box products. I hope you’ll join us for a chance to win a $25 gift card to Simon Says Stamp. Click the link in my bio for all the details and more info. on my project. #ssswchallenge #sssendacard #sssunitedwecraft #memoryboxco #gifttags #notacard #handmade #handmadegreetingcards #handmadecards
Loading Comments...